Common sense tells us that using a cell phone or other hand-held device while driving is going to increase your chances of causing or being involved in a personal injury accident. So, in states that have banned the use of such devices personal injury car accidents and collisions should have been reduced. Right? Wrong.

A new study by the Insurance Institute for Highway Safety just released and reported on by the New York Times concludes that these laws have not impacted the total number of personal injury accidents of car crashes at all.

And, of course, there are a few flaws in the study.

First, the study determines the reduction in use of hand-held devices by drivers in these states through not exactly scientific methods. Researches went to street corners and exit ramps and observed people using cell phones or not using cell phones and compared that number to the number they obtained before the bans. Seriously. That’s what they did.

Second, and the researchers concede this point, drivers may have simply switched to hands free devices (ya think). Practically every driver I see is talking on a cell phone, has a visible ear-piece, or they are simply mad and talking to their imaginary passengers or co-pilots.

A better study would have examined personal injury accident statistics and compared when car accidents or trucking accidents took place as well as their total numbers after the ban as compared to before – did those numbers move? Also, it would be nice to know if actual cell phone use has decreased during peak driving times. My guess is that it hasn’t. 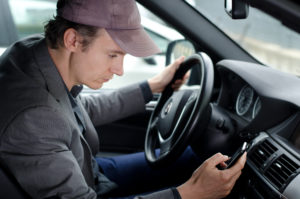 The Times article seems to indicated that the researchers may feel that talking on our cell phones while driving isn’t quite as distracting as we thought. This is simply the wrong conclusion and a dangerous one.

Cell phone use while driving causes thousands of needless personal injuries, car accidents, and trucking accidents that involve serious brain injuries and even death every year. I am not naive enough to think that people will stop multitasking while driving.

But what is needed is better technology that allows drivers to keep as much of their attention as possible on driving and stricter laws, and penalties that would encourage the use of this technology. Or at least, that would be a good place to start.